Almost a decade ago, news of a botched art restoration had hit headlines and thus the social media circuits. The piece in question, Ecce Homo, was turned into a near monstrosity at the hands of a well-intentioned parishioner, garnering ridicule all across the globe.

How did the idea between Dime and Reebok come about? 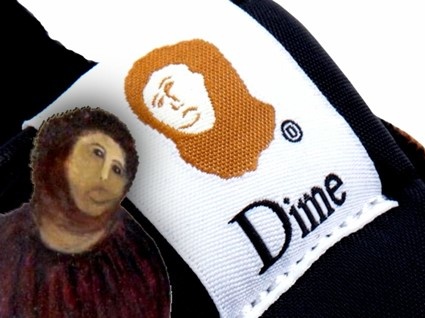 Dime, the imprint based all the way in Montreal, took an immense liking to this story; and as a result, they created a number of apparel pieces in commemoration. Fast forward to 2021 and these homages are picking back, as the brand is using the artwork atop their upcoming Reebok BB4000 collaborations.

Dime is following its recent Kamikaze II Low collaboration with another release alongside Reebok. For this particular foray, the Montreal outfit has chosen to reimagine the BB 4000.

What is the story behind the Reebok BB 4000?

The Reebok BB 4000 is an outdoor basketball sneaker from the late '80s and early '90s that has since transitioned to more of a lifestyle model. Here, we find it dressed in two colorways, one with a brown suede base and another predominantly done up in white leather.

Dime's BB 4000 collab harkens back to a botched restoration attempt of the Ecce Homo (Behold the Man), a 1930s painting depicting Jesus wearing a crown of thorns. The artwork has been transferred onto the tongue tag on each pair of BB 4000s.

Though prepared in two ways, both of the BB4000s follow a similar design. Their inspiring portrait is dressed only atop the tongue’s woven label, clad in shades of either a dark navy or a light brown.

Construction is where the options begin to deviate, as the blue-marked colorway is composed primarily of a white leather; the accents overlaid, such as the vector at the side as well as the Dime-branded hang tag, are then coated in a cool tone to match the aforementioned. In departure, the accompanying pair contrasts in full, browned suedes as well as blacked out laces, midsoles, heel tabs, and linings. 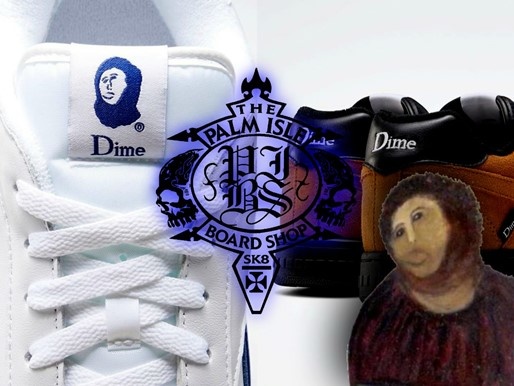 Grab a look at the pack right here at Palm Isle Skateshop.